The rooster on St. Stephans Cathedrale 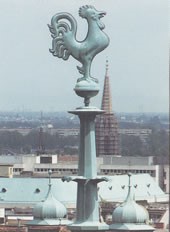 Towards the end of the 15th century lived a brave and wise knight named Kaspar von Schlezer in Vienna. His beautiful and good wife was the happiness of his life, with whom he lived in the deep harmony. This harmony seems to vanish as one day the knight was commissioned by a prince to travel with an important message to the Sultan of Konstantinopel/Turkey. Kaspar von Schlezer was very concerned because he knew quite well that the prince – a favorite of the current regent – had developed a secret love for his wife and it seemed to him as he just because of this the prince send him out of the country to have him out of the way.

However, the order had to be obeyed, and so he asked his wife merely about remaining faithful to him and not to move – either by cunning or by force – to give another man her hand before she was not secure of his death. As the safest mark of his death she would receive then the silver crucifix that he wore on his chest.

After a short period of stay in the Turkish capital, he was attacked by robbers, captured and sold as a slave. But when his escort returned to Vienna, they were afraid of punishment and so they told everybody that Kaspar von Schlezer is dead and was buried by them. The loyal widow started mourning for three years and resisted all proposals of marriage and still hoped him to return because the main evidence of the death of her husband – the silver crucifix – was not given to her.

Meanwhile Kaspar von Schlezer – still in captivity – was faring about his wife loyalty He considered her to be married already to the prince who had sent him away. One night he had such a bad dream where he saw his wife standing with the prince at the altar in the church of St. Stephans Cathedrale and woke up. “Poor me!” he screamed upon awakening, “So tomorrow is Bertha my wife – the wife of another man! Oh, if I only could be until tomorrow in Vienna, I would give my soul for it!”

Hardly this was spoken an evil spirit in form of a rooster appeared in front of him. “Come!” he shouts. “If I get you there your soul will be mine” I will bring you there before dawn – to Vienna!”

The knight thought for a while and said, “Well, I agree, but I only under one condition that I do not wake up once during the whole journey. However if this should happen, then I am not yours and you have to let me go.” The evil rooster agreed about the condition of Schlezer Kaspar von Schlezer and went away with him.
When they nearly arrived in Vienna the evil rooster suddenly scented morning air and started crowing with all his strength, so that Kaspar von Schlezer awoke. Oh what a joy! He was located near the St. Stephans Cathedrale, where the roosters suddenly dropped him to the ground. The rooster was very angry but he had to let him go.
Kaspar von Schlezer rushed joyfully to his beloved wife, who awaited him in longing. In memory of his adventurous liberation he put a replica of the rooster who brought him back home on the roof of St. Stephans Cathedrale. And there he is until today.

Note: A rooster can be found very often on the roof of a church. He is supposed to be the guardian against the devil, who is also known to accomplish his dark deeds only until cockcrow. But the rooster is also a symbol of vigilance, especially but also a symbol of light, because he crows before sunrise and so heralds the coming light.

The bowling alley at St. Stephans Cathedrale
Close to the place of the watchman of St. Stephan was once a bowling alley (probably once in while the bored watchman might have set up a game with a few lively fellows. Unfortunately and due to the circumstances the space was very limited and therefore the alley was very brief. So it was customary, that they turned their back to the cone to let out the ball roll between their legs.)

At that time there lived a shingle maker – named Kunrat – in Vienna – He was a master in bowling and able to meet with each thrust all nine. As he was also a wild drunkard – they called him “Ewig Trunk”.

One evening the landlord of the inn – where he had got deeply drunk and bowled all night long- got tired of him and asked to leave the inn. Kunrat was very angry. He shouted and swore by his death and the devil that he would still continue bowling that night and all nine cone would be hit by him even if he had to play alone. So he came to St. Stephen’s Church and rose among wild imprecations the spiral staircase to the bowling alley of the watchman.

As soon as he had taken the ball in his hand, he felt a hand on his shoulder. Turning round, he saw a gaunt man in a long gray coat who looked at him with piercing eyes so that the Kunrat shivered. Cursing, he called out to the stranger: “What do you want here? Leave me alone! Or do you want to play with me? But I tell you I definitely throw all nine cones. Something that you want be able for!”

“I take the bet,” said the stranger. So Master Kunrat threw the ball: “All nine” he shouted to his partner with laughter; “Now it’s up to you if you can beat me!” He took unnoticed a cone and threw it out of the window to make the stranger loose.

But the stranger noticed the trick of Kunrat. He straightened and grew to more sinister size. “This is not our bet,” he said in a hollow voice

“I am The Death and I will meet all nine, even if there are only eight”. He threw the ball into the cone that all eight cones fell immediately. As the ninth Master Kunrat sank death to the ground.

The next morning the watchman found Master Kunrat death in the middle of the bowling alley between the cones.

Long after this event each visitor had to pray for the poor soul before he touches the ball to hit the cones.
From the book:

Previously, the people on the vineyards had no clocks. So they watched out in the afternoon for “white woman” or to the “Heavenly Mother”. They knew – when she appeared – that it was time for as short break. “Now is snack time, “the Mina“ (this is how they called her)’is here!” that’s what they said.


Warning: count(): Parameter must be an array or an object that implements Countable in /www/htdocs/w00f81ab/viennainsiders.com/wp-includes/class-wp-comment-query.php on line 399


Warning: A non-numeric value encountered in /www/htdocs/w00f81ab/viennainsiders.com/wp-content/plugins/ultimate-social-media-plus/libs/controllers/sfsi_frontpopUp.php on line 61

Warning: A non-numeric value encountered in /www/htdocs/w00f81ab/viennainsiders.com/wp-content/plugins/ultimate-social-media-plus/libs/sfsi_widget.php on line 279